The geese saga of Lake Daylesford

This photo shows the Lake Daylesford geese in their new home, a private animal sanctuary in the Mornington Peninsula. Here, the geese have access to five lakes and are able to range freely on the paddocks without having to cross any roads, encounter dog walkers or groups of tourists. And they are protected by a fox proof fence. As recently as two weeks ago, a goose was found near the mineral spring without a head, a typical sign of fox attack.

In my mind, the rehoming of domestic ducks and geese from the Lake last week was in fact a rescue. One of the worst things about being a nature columnist, working in domestic bird and occasional wildlife rescue is that people send me photos of killed animals, asking for advice. I was extremely upset in 2018 when a friend of mine sent me two photos, depicting five geese that had been brutally run over in a hit and run. The police were involved, but the culprit never found. The geese that were rehomed last week will now avoid such a fate.

A local business ( I have removed their name) campaign for the geese to stay. Nice pic of them on the road, near where they were run over in 2018.

The council have put forward many arguments for removing the geese, but I will concentrate on the welfare of the geese and ducks. I understand people dearly love the geese, and love to take photos of them, but we need to be mindful of the birds themselves and THEIR needs.

The geese, and the ducks which are regularly abandoned at the lake such as Muscovy ducks, Indian runners and mallards are domesticated animals. They are not wild creatures. In many cases they have lost the ability to fly any distance, so even if they wanted to move to another lake, they cannot. All domestic birds require appropriate food, protection from predators such as a night shelter, bedding eg hay, veterinary care, and when the flock is too large for the space, rehoming of some individuals in another home.

The geese are quite tough and able to fight for limited food resources and fend off dogs and foxes, and as such their numbers have grown over the years. Unfortunately, the smaller domestic ducks live short and miserable lives after being abandoned at the lake, exposed to predators, dogs, and without access to a proper diet.

Nigel’s Animal Rescue is highly regarded by my small and tight knit animal rescue community. Nigel has found homes for ducks and geese in over 70 urban lakes in Melbourne. His main welfare concern for dumped geese and ducks in urban lakes is exposure to injury from fish hooks, and malnutrition that results from being fed white bread. The malnutrition results in a deformity called angel wings, and the birds completely lose their ability to fly.

For me, the uproar against the rehoming of the domestic geese and ducks has been mystifying. I know from experience with my rescue cockatiels and budgies that birds settle into a new place within mere hours if they have their flock mates, good food and shelter. My only hope now is that the four geese who were separated have the opportunity to join the rest of their flock as soon as possible.

And there ends my article printed in the Local – at a 500 word column I thought it best to focus on the one issue that for me is a no-brainer – the welfare of the geese and ducks.

When we look at other arguments against the geese, the issue is less clear cut. If I had been approached months ago, when the team at council were looking for an appropriate contractor, I would have advised them to stick to the animal welfare argument only…

Daylesford is the home of one of the originators of permaculture, David Holmgren and a thriving permaculture community. Words like feral, introduced, weed, native, and biodiversity have very loaded connotations. Words such as “nativist” are used to describe people wanting to control gorse and blackberry, and harmonious “weedscapes” are the ideal rather than “Roundup drenched battlefields” where only native plants are planted. We have campaigns here to SAVE our willows, unlike in Kyneton where the community is eagerly working with the North Central Catchment Management Authority to make the entire Campaspe River willow free within decades.

It is against this community context that the argument to remove the geese to encourage native birds such as swans doesn’t hold that much power. Folks wrote about the “peaceful coexistence” of the two species, and shared my article on “mating swans at Lake Daylesford” in 2016 as proof! 🙂 Do the geese drive away the swans? The Black Swan entry in my trusty 11 Volume Handbook on Australian and New Zealand Birds (HANZAB) has no mention of competition with any other species, and no mention of domestic birds such as geese. I have also checked with a few of my scientific colleagues at BirdLife Australia ( my day job) and I have asked among my wildlife carer contacts. There isn’t a paper as such written proving that geese drive away swans, but plenty of anecdotal evidence that a huge geese flock is detrimental to native birds, whether at a natural or artificial lake.

The geese consume a lot of food per bird, mainly grasses. The droppings move the nutrient load then from the grassy areas of the park into the water, which can create algal blooms. The algal blooms and the turbidity then have negative effects on the native plants in the water, which are a food source for the swans and native ducks.

My focus to date has been on woodland and forest bird ecology, and terrestrial ecology such as forest ecosystems.  I confess that I don’t know too much about waterbirds and  lakes, and I am sure there is a duck or swan ecologist out there who could write about this issue with more authority!

But I will end this article on a final note. One of the species regularly dumped at the lake in the domesticated form of the Mallard, a large, powerful duck species from Europe with a rapacious sexual appetite. The usual mode of ducks courting is actually a kind of rape ( sorry – nature is so nasty sometimes!) but this mating style is more intense when employed by a very large male duck.

And these Mallards, quite naturally, take a fancy to one of our native duck species, the closely related Pacific Black Duck. 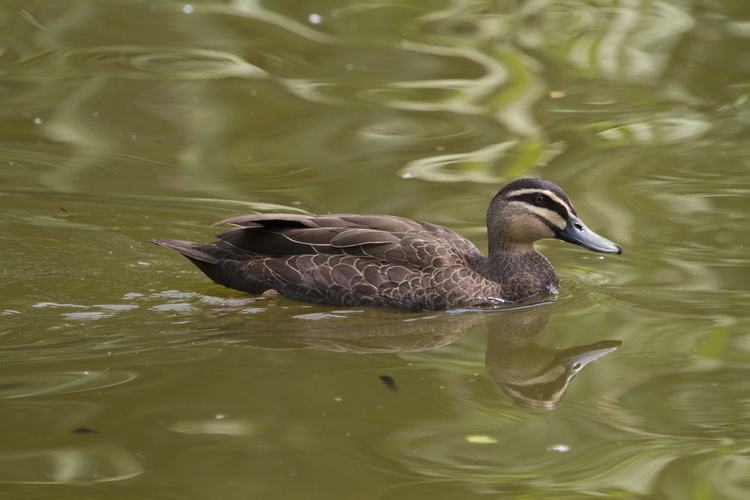 From the Field Naturalists Club of Ballarat blog, reporting on a presentation by waterfowl expert Patrick Guay:

“When these two species interbreed the Mallard strain is dominant and in successive generations the characteristics of our native Pacific Black Duck may be lost. The Mallard are more sedentary birds and the Pacific Black Duck hybrids may not be as able to survive in the long term as pure native duck species are nomadic especially in times of drought. Hybrids of waterfowl are common, many occur in the wild, and many are fertile. If the situation resulted in sterility as in the case of mules, which are crosses between horses and donkeys, then there would be fewer problems.

People seem to have an urge to set their unwanted ducks free on local ponds and lakes. These urban ponds are now acting as a Mallard gene pool reservoir. Mallards are able to out-compete male Pacific Black Ducks because they are dominant and don’t rely on courtship behaviour. The male Mallard forces itself on female Pacific Black Ducks.

The Mallards also breed earlier in the season than Pacific Black Ducks. Mallards breed with other Mallards first and as there are an excess of Mallards they then breed with Pacific Black Ducks. In New Zealand their pure Black Duck has disappeared through hybridization after the Mallard was introduced in the mid 1800s. The first hybrid appeared in 1917 and by 1980 there were less than 5% of the black ducks left.”

This article has not even touched on the calls for the Council to be sacked, the media power of celebrity chefs, the actions of the protesters that drew out a 1 hour rescue to several hours, and other somewhat juicy items that I leave for others to comment on! 🙂

I am just glad the geese, and the domestic ducks that were formerly at Lake Daylesford now have a better life…