Every four weeks I have a short segment on ABC Ballarat Radio talking birds with presenter Gavin McGrath, and last session was about falcons and other birds of prey. And I realised that after writing nature articles on our local flora and fauna since 2008 – somehow I had missed writing about peregines – a species which is a personal favourite.

Peregrine Falcons are sleek, muscular and powerful with large piercing eyes and huge yellow talons; every Galah’s worst nightmare! Peregrine Falcons are a cosmopolitan species, distributed across continents, but the Australian subspecies (Falco peregrinus macropus) is a heavier bird with larger talons – enabling it to take down larger prey. Although known for preying on pigeons, here in Australia the big and chunky Galah is one of the peregrine’s favourite prey species. A Peregrine Falcon about to perch – displaying its impressive talons! Photo by David Whelan Wildpix Photography

Peregrine Falcons are specialized bird hunters. They soar high at heights of up to 1200m,  scanning for flocks of birds – starlings, galahs, corellas and pigeons. When a hunting falcon has selected his or her potential prey bird, they lock on with those wonderful eyes like a missile finder, and enter into a spectacular hunting dive known as a stoop.

The peregrine folds its wings into its body and simply plummets out of the sky on a steep diagonal – any last-minute adjustments to the stoop are made by the bird executing a dramatic body roll, rather than moving its head! The speeds reached are variously listed as 237 km per hour, up to 300 km per hour – the fastest animal in the world. Like other birds that fly and move at high speeds, such as swallows and swifts, the forces the bird experiences as it flies are high enough to make even the most seasoned human aircraft pilot pass out – over 10 g at the end of the stoop!

This spectacular hunting method is called “waiting-on” and involves “circling or soaring and prospecting before stooping at a shallow angle with wings partly or fully closed” ( HANZAB Vol 2).   Waiting-on can also be carried out by flying underneath the flock of birds then flipping over and striking with talons, or carrying out “false stooping” beforehand to break up the flock and single out any stragglers. Peregrines will also hunt by “still-hunting”; which is hunting from an unconcealed perch, followed by attack, either by gaining altitude and stooping or making a level dash. Peregrine mated pairs will also hunt cooperatively,  with one bird flushing prey and the other catching it. How romantic!

After a successful kill, the falcon takes the bird to a perch or even a safe spot on the ground to pluck the bird before eating. I experienced the thrill of a peregrine hunt at very close quarters some years ago. I was on my way back from Warrnambool, and decided to visit some of the Ramsar listed lakes and wetlands for a spot of birdwatching. Only I didn’t think it through – it was 2008 and the height of the Millennium Drought. I pulled up to a bone dry depression surrounded by parched paddocks, thinking – well this is a bum deal! I was in my trusty Holden Commodore station wagon, and had my binoculars on the front seat next to me.

Movement in the sky ahead, and before I even had a chance to grab my binoculars a Peregrine Falcon was bearing down toward the car’s front windows in extremely hot pursuit of its prey! The peregrine banked steeply and just avoided crashing into the the windscreen – the bird being chased actually clung to the back right hand window of the wagon, its chest heaving!
The bird using my car for protective cover was most likely a Brown Songlark – a bird of the open plains that I did not recognise at the time. After resting on the car for a bit the Songlark flew off. The peregrine was long gone and I left that spot soon after,  filled with excitement and gratitude – what a moment!
In this video narrated by the UTTER LEGEND David Attenborough – the film makers attach a camera to the falcon itself – so you get a “bird’s eye view”:  https://www.youtube.com/watch?v=ovocT91G1ww A pair of Peregrines at Laverton Industrial Estate, by David Whelan. @WildPix Photography

Unfortunately, the peregrine’s taste for domestic pigeons draws the ire of pigeon racers. Last month, a Peregrine Falcon was shot in Romsey and had to be euthanised due to the extent of its injuries ( May 25 edition of the Midland Express) . And this week in Melbourne, Nalini Scarfe of Boobook Wildlife Shelter rescued a bird shot in Diamond Creek. These shootings are illegal under the Wildlife Act 1975 – but how to find the perpetrators? And the consequences for breaking this law are far too low. This law is under review by the Victorian Government and the Victorian National Parks Association have provided some helpful info and details on how to make a submissions here. 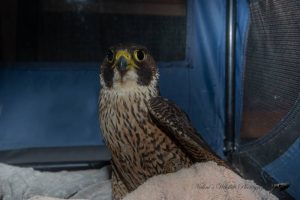 The poor Peregrine at time of rescue. Nalini Scarfe

Nalini Scarfe, Boobook Wildlife Shelter, describes the injuries:
“The falcon has an injury to the propatagium or wing web that has required stitches and he is on a course of antibiotics and pain relief for the infected wound. He also has a pellet in the tail which luckily missed hitting bone but could still cause damage to the freedom of his tail movement. If this happens he will have to be euthanised. There is also the risk that the injury to the fragile sheet of elastic tissue which forms the wing web may contract and cause loss of wing flexibility. If this happens he will also have to be euthanised. These birds must be 100% fit to survive in the wild. Only time will tell if this lovely bird will make it through the rehab process to release.”

I wanted to end on a happy note – one of the best things about 2020 was being able to watch three young Peregrine Falcons grow from tiny white chicks to magnificent young falcons – the 367 Collins St Falcons!

The Livestream is part of BirdLife Australia’s Victorian Peregrine Project, run by  Victor Hurley, Kersley Albert and a host of other dedicated volunteers. The website has footage from the 2020 season, and a fantastic FAQ section. And the associated Melbourne CBD Falcons YouTube channel is fantastic!

Debbie Lustig was the Livestream moderator in 2020 – and wrote a fabulous article detailing the rescue of one of the fledged falcons who had become trapped on a balcony.

So where can one see Peregrine Falcons in our area? For your traditional cliff nesting views, try Werribee Gorge, or Devils Kitchen. For a chance encounter – keep your eyes peeled in the Glenlyon/ Porcupine Ridge region where they are seen hunting, or perched on a tall manna gum. I have also spotted them flying over those wonderful volcanic hills near Dean. Photographer David Whelan who kindly supplied the photos has pics of them at various locations around Bacchus Marsh and Laverton – including quarries and Village shopping centre! A Peregrine Falcon carries its prey ( a Spotted Dove) back to a perch for plucking, by David Whelan

Many thanks to David Whelan and Nalini Scarfe for use of their photos, and also Martin from Leigh Valley Hawk and Owl Sanctuary