As thunder rumbled in gathering clouds, with patches of blue sky and impossibly white cumulus clouds edged with sunshine I thought to myself ‘ooh, I might see some swifts today’, And lo! Within minutes an incredibly athletic looking bird flew low over the property, closely followed by a second bird. White-throated Needletail! These birds are a large species of swift, somewhat like a swallow, superbly aerodynamic with a cigar-shaped body and long curved wings like a scythe.

White-throated Needletails are one of our summer visitors from overseas – in this case, from Siberia and Japan. The swifts visit Australia each summer to spend their winter non-breeding period – then when spring returns in the Northern Hemisphere they fly back.

In warm, humid weather,  the wind movements at storm fronts provide perfect conditions for the swifts to hunt masses of insects that may be caught up in the gathering winds. The way that the swifts forage for insects is interesting. Rather than pursuing individual insects, the birds simply plunge through a patch of swarming insects with their bills wide open – a bit like a baleen whale through krill. Special bristles around their bills help guide the insects in. The swifts then dive and weave and repeat through the same prey-rich area. 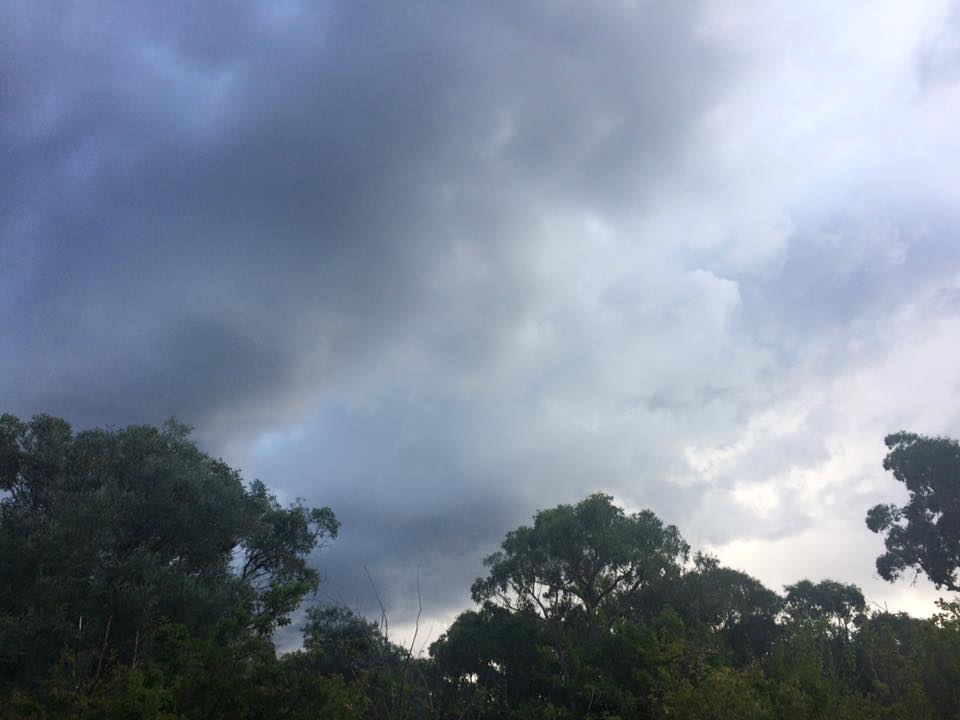 Don’t bother trying to find the swifts – they had already zoomed by – this pic is to capture the clouds and the time of day – classic swift foraging conditions!

After spotting the two swifts, I gathered my binoculars and went for a walk down the dirt road, hoping to see more swifts – and about half an hour later I saw a flock wheeling and zooming in the skies, high up but still close enough for good views. Much of their foraging is done at great heights where they cannot be seen with naked eye or binoculars. I counted about twelve of the birds – and was thrilled to bits as I have not seen them in recent summers. For a few years a while back I used to have a flock of fifteen or so regularly patrolling the area at this time of year.

Sadly, a 2014 study by Mike Tarbuton revealed that numbers of these lovely birds have plummeted in recent years. There are still flocks of hundreds or even thousands to be seen but overall when the data was ‘crunched’ Mike noted a decline in the order of three quarters of the population. The species conservation status was subsequently upgraded to Vulnerable by the BirdLife Australia Research and Conservation Committee. Unfortunately the government ( state and federal) have yet to act upon this recommendation, and the species is still classified as ‘secure’.

It’s a perilous world for a long distance migrant. Legal and illegal logging in prime breeding habitat in Siberia is removing the old poplars, larch, spruce and oak trees that the swifts nest in at an alarming rate. Like many Australian birds,  the needletails require hollows to nest in. This must be having a devastating impact on their numbers. And then here in Australia,  while the threats are much less, I would think that our strange climate change weather may be affecting the swifts.

In the past it was considered that the White-throated Needletail never landed on tree or cliff while in Australia – and spent months on the wing. While they can remain aloft for weeks and months at a time, sleeping even, radio-tracking and some more recent observations reveal that they do alight in Australia. The swifts have been observed sheltering in rock crevices and hollows in very bad weather, and even clinging to trees during a bushfire. Which seems strange – the swifts use the updrafts and wild winds that come from fires to forage for insects, and one would think that they would simply fly up and away to get away from a fire!

Looking at their body shape and aerodynamic flight, you could easily think they were closely related to swallows. But swifts are in a completely different group and may be more closely related to hummingbirds. The attractive and large eyes of both groups are certainly similar, as is their tiny feet, and incredibly shaped wings.

I was most fortunate to see White-throated Needletails while I was in Japan in 2015. I was there for the summer, on the big northern island of Hokkaido, on the side of a large mountain. I was in an onsen, a Japanese bath which was outside, and filled with hot volcanic spring water. I looked up,  and there were a few needletails flying above, high in the blue sky. It gave me such a thrill to think that I could have seen these very individuals all the way back home in Porcupine Ridge!