Each month I will reproduce my Nature Diary Articles from the Hepburn Advocate – Here is this month’s! : ) ( November 2015)

This spring, most mornings my first waking moments have been filled with the sound of the most exquisite birdsong; a strong, mellow, melodious call. No, it’s not a magpie, in this case the songsters are a pair of grey shrike-thrushes. These birds are often called grey thrushes, and are renowned for the beauty and complexity of their songs. In fact, one of their old names is harmonious thrush.

In winter this spectacular song is reduced to a simple and oft-repeated “dite”! 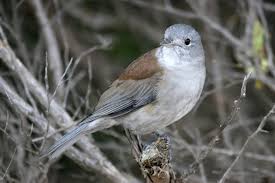 A male Grey Shrike-thrush, pic from the CSIRO website.

Grey shrike-thrushes are mainly grey, with a reddish colour on the back or mantle. They were absent from my garden for a couple of years. I have worried that maybe it’s due to the presence of my small dogs, but I sit here writing this with two dogs by my side on the outside couch, while Mr shrike-thrush calls loudly from the hawthorn. Grey shrike-thrushes are neither shrikes or thrushes – they were named by the first Europeans as something similar to both of these species. They are unique to Australia, and are in the same family as whistlers and shrike-tits.

A few weeks ago, I was lucky enough to witness a courtship duet. At about 7 am, the male and female were perched high in the silver banksia, a couple of branches away from one another. The female appeared very casual, almost disinterested, looking into the distance as the male poured out his love and commitment and reproductive fervour in beautiful song. But then, at last, she joined in and they sang together in perfect unison. Both birds also snapped their bills in a cracking sound that added drama to the duet. The song is very important to maintain the pair bond between the birds who mate for life.It also lets other shrike-thrushes know that this is an occupied territory.

If you have a nest in your garden, count yourself lucky as territories may be up to ten hectares in size. Your place is obviously prime real estate!

These lovely birds do not seem to mind the presence of friendly humans and will nest on verandahs, in flowerpots, in old coats, car ports and sheds.  My pair are nesting in an old rhododendron. If they nest in an inappropriate spot, it is easy to encourage them to nest nearby by erecting a little nest platform out of wire and wood.

The male, female and young look pretty similar, but if you have them in your garden they are likely to be quite tame and allow a close enough look to distinguish them. The males have a dark black bill, while the female’s bill has pale grey. The young have a reddish or rufous eyebrow.

The shrike-thrush pair may re-nest after the first young fledge, and then repeat – sometimes three times if conditions are ideal.

They look like soft sweeties but they are actually quite successful  hunters – living on beetles, spiders, frogs, birds’ eggs, tiny nestlings and small mammals such as baby house mice. Grey shrike-thrushes prefer to forage for food in shrubs, along the ground, and near fallen logs, so they are very vulnerable to attack by both pet cats and feral cats.