The Messmates are in flower! This year’s flowering event is a rich fulsome flowering, each tree covered in masses of small white flowers, and the surrounding air alive with insects and honeyeaters.  This is wonderful to see after the sad, impotent flowering of drought years that produced dry brittle blossoms that soon died. This year’s blossoms began around Christmas, and will keep flowering for up to six weeks. That is a lot of pollen and nectar!

A Messmate is a type of Eucalyptus tree, colloquially known as a stringybark due to its fibrous stringy bark. Some people call them Messmate Stringybarks to distinguish them from other stringybarks such as Red Stringybark, another local tree. Messmates love high rainfall, fertile soils and seem to thrive in the cold. I find the Messmate, Manna Gum, Blackwood, and Silver Wattle combination of the Wombat Forest beautiful to behold. 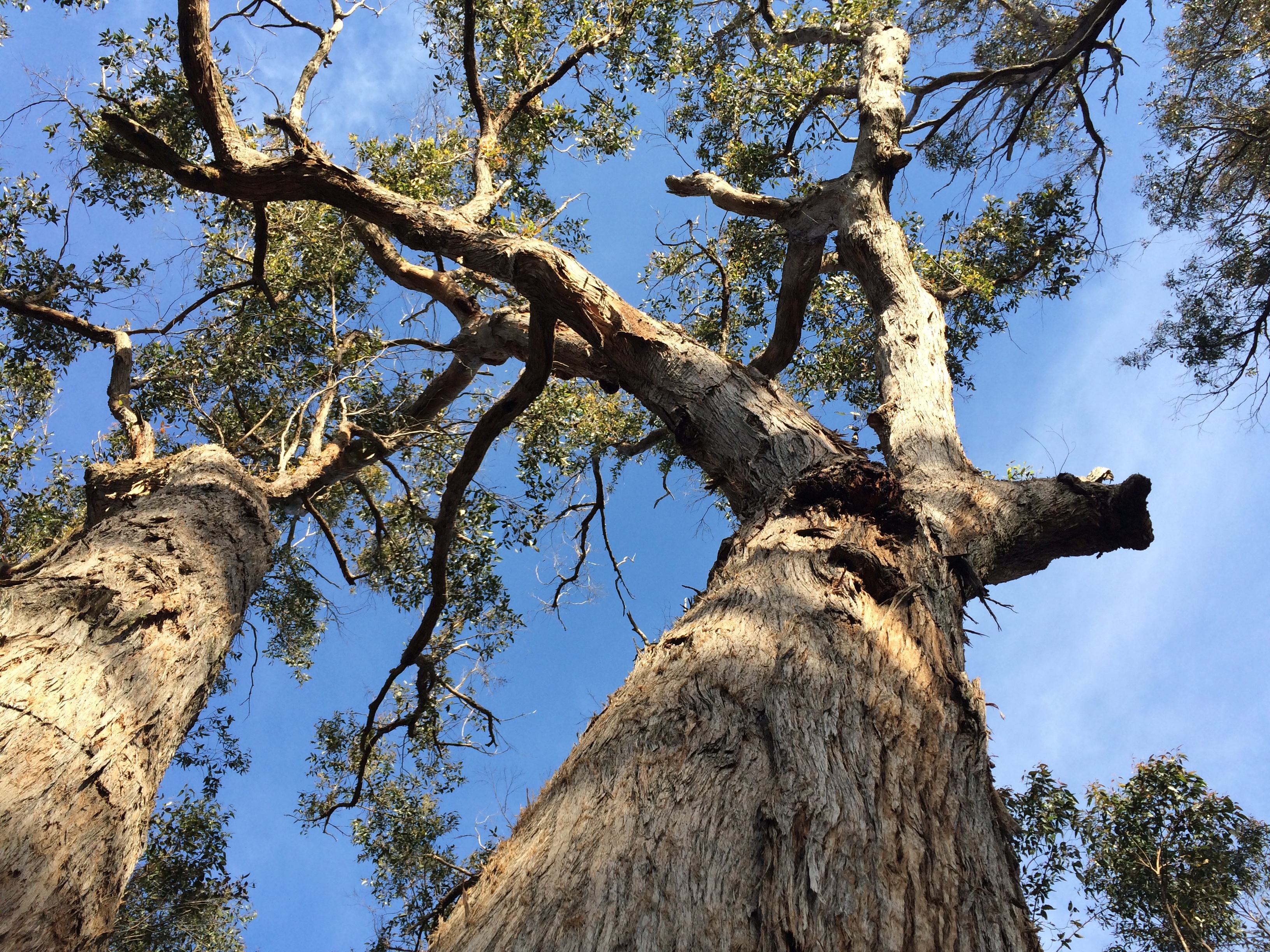 A couple of beloved Messmates at home at Porcupine Ridge

The Messmate was the first Eucalyptus to be described by Europeans, described by a botanist by the name of L’Heritier from specimens collected from Bruny Island  in 1777, during Captain James Cook’s third Pacific expedition. It was named Eucalyptus obliqua after the Latin obliquus, meaning oblique. This refers to the distinctive uneven join of the leaf margins to the leaf stalk. I used to think this was an identifying feature – but there are actually many Eucalypts with this leaf pattern.

So how does one identify the Messmate? If it is a rough barked tree, with rough bark all the way to the ends of the branches, find some of the fruit, or the gum nuts. If they are smooth and shaped like a wine glass, or wine barrel, it is a messmate. If the gum nuts have three pointed bits sticking up from inside the “barrel” it is likely to be a Red Stringybark, a stringybark gum which is common in Hepburn and drier areas of the shire.

Messmates have a wide distribution, occupying most of Tasmania, and the wetter cooler regions of Queensland, New South Wales, Victoria and westwards as far as Kangaroo Island. Their size and shape depends greatly on their habitat – from a twisted 2 metre high tree on an exposed coastal bluff, to a massive tree of almost 90 metres in a sheltered situation in Tasmania.

In the Daylesford region, you can see this variation in form in the Messmates. However I would add that it is not only habitat (soil and rainfall) but also management of the surrounding area that determines tree form. Out in Porcupine Ridge, our old Messmates have massive branches coming out from the main trunk just a few metres off the ground. This gives the trees an all over bushy shape, with ample branches exposed to sunlight for maximum blossom production, beautiful habitat within all the intersecting branches and plenty of opportunities for tree hollows. In Wheatsheaf or Trentham, the Messmates seem to be twice as tall, and they branch at 10 metres above the ground.  The canopy is smaller and tighter. I used to think this more vigorous growth habit was due to the more fertile soils and higher rainfall of these areas.

The Porcupine Ridge Messmates have been left as shade for stock such as sheep, and as such could be very old. The Messmates in the wetter areas of the shire live in a forest that has been logged and mined and logged and then logged again almost beyond recognition. The regrowth trees, of 50 – 120 years old that I am seeing in Wheatsheaf, while taller than the Porky Ridge trees, are much younger, and they are part of an even-aged stand of forest. They grow side by side, competing for the light, and crowding each other’s form.

What I wouldn’t give for a time machine to go back to see the Messmates of the Wombat Forest before the first one was cut down. I imagine huge towering trees, with massive branches each the size of a tree itself, side by side with Blackwoods with trunk diameters of several metres.  I imagine Greater Gliders and Koalas feasting on the leaves, and Sugar Gliders and Mountain Brushtails enjoying the masses of blossoms, all the while their apex predators Mr and Mrs Powerful Owl hoot in the distance. We still have this story happening in the Wombat Forest, but in much reduced glory – bless these plants and animals for holding on despite repeated onslaughts.

I would like to acknowledge the work of Wombat Forestcare, for they campaign tirelessly for the Messmates and their fauna. Please check out their website www.wombatforestcare.org.au