One of the things I love most about leading nature walks is that you just never know what you may see. One family nature walk, deep in the Wombat Forest, we encountered a wombat, staring at us from the other side of the creek. Some of the mums thought I had put a wombat statue there for the kids. More recently, while leading a walk for a big group of locals and tourists on Cornish Hill Reserve, we found koala poo.

This is a first for the Reserve. In 2016, I wrote about the results of Wombat Forestcare’s camera trapping efforts on Cornish Hill. The survey revealed native animals such as tawny frogmouth, echidna, and a black wallaby with a joey in the pouch, and another wallaby eating fungi in its paws. And a surprise – a common brushtail possum (rather than the wombat forest specialist the mountain brushtail or bobuck). But a koala has never been spotted – in ‘person’ or by scats – until now.

It was so wonderful to see some fifty people and a few well-behaved doggies on leads turn up for the walk on Saturday, March 10. Margie Thomas and the Friends of Cornish Hill Committee had agreed to do something a bit different for this nature walk, and so we were in the printed and online program for Chillout Festival. We had visitors from around Australia and even the world. 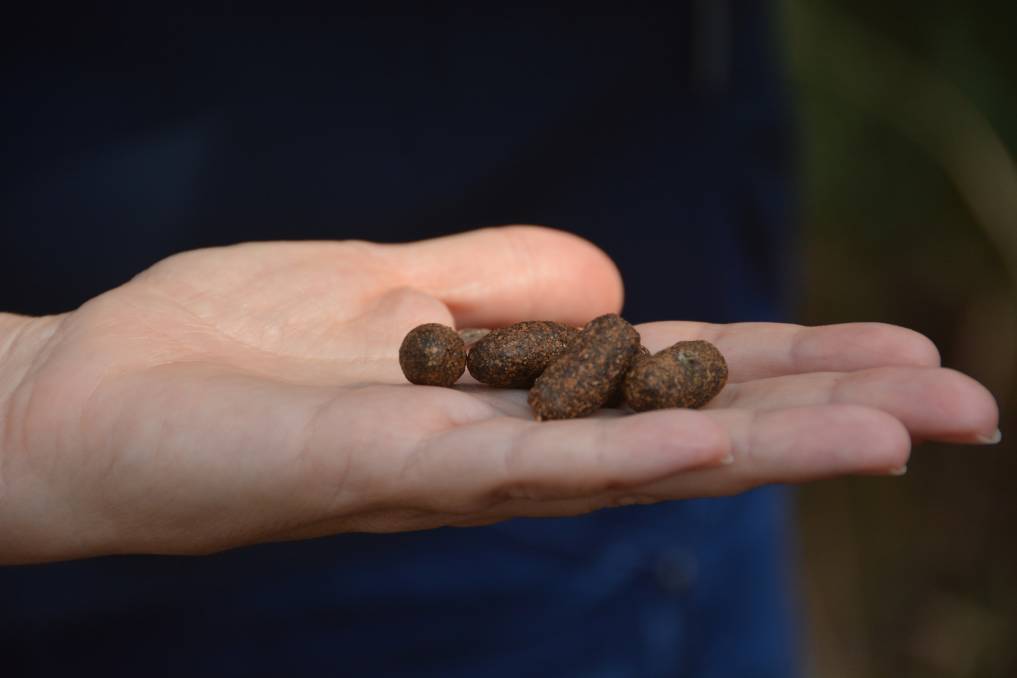 This beautiful photo was taken by Helen Greenwood

With such a large group, one must walk slowly through the bush, and then stop and share points of interest. I had done a reconnaissance the day before, but had chosen a different path. So as always, I scanned the ground for clues such as pine cones chewed by yellow-tailed black cockatoos, and there were the koala scats, here and there across the path. I stopped the group and held the scats up in my hand for all to see.

Koala scats can be identified by their uniform oval shape. They are scattered beneath the tree, and unlike possum scats, they are very similar to one another, with a smooth, but granular surface. And when you break them open, they are uniform in texture –composed of very finely chewed eucalyptus leaves. And if the scats are fresh, they have a delightful musky eucalyptus scent.

It was very enjoyable encouraging people from Lithuania, New Zealand and Belgium to pass around and sniff koala poo. Surely an important part of the Australian experience.

Seriously though, members of the Friends of Cornish Hill are excited to add the koala to the growing list of native animals using the reserve. The eucalypt trees on the side of the hill where the scats were seen were mostly narrow-leafed peppermint. It is a bit of a myth that koalas only eat manna gums. Koalas actually eat a dozen or so of the local eucalypts, and it varies from place to place. In the You Yangs, the favourite food trees are river red gum, blue gum and yellow gum. In the Ballarat area, it is messmate, manna gum, and brown stringybark. Here in Daylesford – who knows. Messmate, manna gum and candlebark are likely candidates.

We are blessed to have regular sightings of healthy koalas in the Daylesford and district area. In other parts of Victoria, the disease chlamydia and over-population in tiny forest remnants cause terrible suffering. Our forest is large enough and hopefully healthy enough to sustain populations of koalas, and still provide enough food.

The Friends of Cornish Hill insist upon dogs on lead in the reserve, on their brochure, and on some delightful signage. This is fantastic as dog attack is a major threat to these beautiful animals. Female koalas will stand their ground to protect their joeys in the face of a dog attack, and sustain terrible injuries and even death to do so. Another threat to koalas is car collision. Koalas have very little road sense, and seem to sit placidly on the road in oncoming traffic. This means they are very easy to spot – so the best thing to do is pull over if it is safe to do so, usher the koala off the road.

The walk on Cornish Hill was very enjoyable, and a great success, so we will definitely be part of Chillout Festival 2019. In the meantime, do go and see this wonderful place – and look out for koalas.  www.cornishhilldaylesford.com.au. The crowd of humans and doggies gathers in spectacular Autumn weather