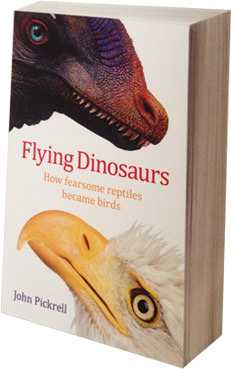 “As you read this, an estimated 400 billion individual feathered dinosaurs, of 10,000 species, can be found on earth, in almost every habitable environment. You need only step outside and look up into the trees and the wide blue skies to find them”

John Pickrell is the editor of Australian Geographic and an accomplished journalist who has followed the last exciting decade or two in paleaontology very closely. Flying Dinosaurs is a culmination of this passion.

Since the first dinosaurs with feathers started coming out of China in the late 90’s, I have been aware of the thrilling notion that there are virtually no differences between today’s birds and the feathered therapod dinosaurs of millions of years ago, but this immensely readable book painted a picture for me like never before. The author describes birds as “simply small, specialised, mostly flight-capable forms of dinosaur”. Small feathered flying dinosaurs ( birds) were around at the same time as the huge predators like Tyrannosaurus rex. And these large dinosaurs were covered in feathers.

Their co-existence was long – for a period of some 85 million years there was a diverse assemblage of dinosaurs and birds. There are some fantastic artworks in the centre of the book illustrating all the new advances in what we know about feathered dinosaurs – and one of these depicts a large feathered carnivorous dinosaur with small feathered dinosaurs perched on his head – much like oxpeckers on a giraffe today.

In a warm and conversational tone, “Flying dinosaurs” covers a wide range of topics such as the evolution of feathers for flight and display, dinosaur sounds ( very unlike any bird!),  dinosaur sex, and more.

For a long period of time, feathered dinosaurs tried out the four-winged method of flying – dinosaurs such as Microraptor, a small raven-sized dinosaur, had winged forearms and winged legs – capable of flapping flight. The wings on the feathers were true wings, with the feathers aerodynamically shaped asymmetrically like modern feathers to provide lift.

The book detailed discoveries of pigments that show that Microraptor was black, an iridescent  blue – black similar to ravens – and this was 130 million years ago! For a fantastic video from the American Museum of Natural History, explaining the discovery of black pigments ( and really realistic depictions!) See Microraptor gui .

The book is not all about the science and ecology of feathered dinosaurs – it also describes the burgeoning trade in fossils and fake fossils! Fossils can be faked in a number of ways: sometimes they are created by sticking together many disparate bones from separate individuals, or they may be combined from separate species to create what looks like a new species. Fossils are also manipulated or enhanced and sometimes even painstakingly created from scratch with excellent craftsmanship.

If you have any interest at all in dinosaurs or birds, this book is highly recommended – an easy read through a veritable tsunami of new discoveries; which still continue! In fact the Flying  Dinosaurs blog has a recent discovery which takes the cake for weirdness… Yi qi, meaning “strange wing” was discovered in 2015. Yi qi was a small pigeon-sized dinosaur with long tail feathers for display, a body covering of feathery fluff coupled with special long fingers and forearms covered with membraneous skin like a bat! And they believed it flew! Clearly dinosaur diversity is only just beginning to be grasped.

A great review of the book can be found on Chris Watson’s fantastic blog The Grip http://www.chriswatson.com.au/blog/flying-dinosaurs