When trying to educate and inspire people to act you can take two routes: fact-based: a litany of facts that any sane person would want to change and then key actions to take- eg to stop pollution, ban the bag. As a wildlife advocate, my writing could consist of listing habitat destruction, new diseases, death by cars, fences, dogs and cats – in the hope of galvanising the reader to act.

Alternatively, you can take the route that aims to first create a connection to the very thing you are trying to save. This second route is what I try to do as a nature writer in my newspaper column, and here on this blog – I aim to help people notice the nature world, and then tell a story about the plants and animals we share our world with. Edgar’s Mission is a grand example of creating this connection – beautiful photos of rescued farm animals living safe, warm and happy lives; lives where their personalities are allowed to thrive. 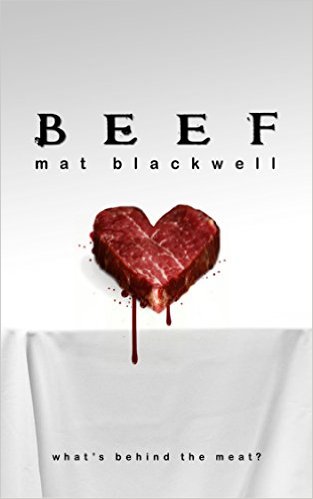 Beef, by Mat Blackwell, also uses story to connect and capture the imagination. In this very probable near future, specially grown ‘vatmeat’ has enabled people to stop raising and killing animals. The idea of eating meat from a living animal is now culturally taboo, so much so that people get a kick out of watching ‘meatmovies’ which are old clips of people happily munching on the leg of a lamb, or a chicken’s wing!! To think!!

The invention of vatmeat has allowed people to continue to eat meat despite the known health effects. The author understands very well that people just want to keep doing what they have always been doing but without the slight, persistent guilt. So it is with a huge sigh of relief that the energy crisis is ‘solved’ by using the vatmeat byproducts as an endless energy source. Air conditioners, plasma TV’s: all still OK!

But Beef isn’t only a science fiction story exploring environment and ethics – it is a love story and a coming-of-age story for lead character Royston, the youngest of the Beef Corporation clan, the fantastically rich and powerful inventors of vatmeat and the subsequent energy crisis solution.

Royston is going through the motions of life in his eccentric family, and happy with his wife Lena and his daughter River. Until BAM! Gene enters his life. Royston falls head over heels for this luscious embodiment of womanhood and the two strike up a very close friendship that oozes with sexual tension and causes a fuckload of consternation for Royston. I say fuckload because if you don’t like swearing you are in for a challenging read. The language is colourful and expressive, perhaps borne from Mat’s years as a comedy writer for Good News Week and MANY other programs  ( The Glasshouse, The Sideshow, Room 101, Wednesday Night Fever).

Back to the story: there are deep secrets in the Beef dynasty, and there is also something going on with Royston’s best friend Luka. I don’t want to give anything away, but let’s just say the climax of the book is simply devastating!!!

The denouement was rather quick but I have to say that I was so moved by the revelations that I had to go and cry so a short wrap up worked for me. The vegan worldview is really hard to understand until you give up all animals products for at least a month, and also research the realities of life for so many animals on the planet. Billions of them. We worry about our dogs and cats and horses being mistreated, but our modern civilisation’s dirty secret is the true cost of cheap meat. When an animal is simply an economic unit, its needs are irrelevant. Movies such as Earthlings explore these issues but they are usually so devastating that most people (me included) simply can’t watch them! They are like snuff films. In fact they are snuff films.

So being acutely aware of the suffering and the magnitude of this perfectly legal and socially acceptable suffering is extremely painful for vegans, and ever-present.

For example, most people look at a field of cows munching grass in the sunshine and they can’t see much wrong with the picture. A vegan sees a group of mothers, who are artificially impregnated year after year, through their stomachs without anaesthetic. Their terrified little calves are taken from them within days, trucked to slaughter and killed by a machine. The cow is then milked every day. This process is repeated every year until the cows are 4-6 years old and then they too are trucked to slaughter – instead of living until 14 or 15. I was a happy vegetarian for twenty years before I was made aware of this process – I still feel ripped off and lied to.

And now, as demand for meat and milk products rises worldwide, more intensive and more cruel methods are being trialled. One could write a very dark novel about this trend. One that would be very hard to read!

But Beef explores an alternate reality, the sort of world where the treatment of animals in this way is morally repugnant, and it reflects on the past in a very light-hearted and easy to read way. Without lecturing! I am passionate about animal rights and transitioning from vegetarian to vegan slowly. I am also a nature writer who cares about advocating behaviour change for a kinder and more nature loving world. So this book really resonated with me, and really moved me. I would love to hear what a happy meat eater thought about the story and its conclusion.

Beef is presently self-published, and I purchased it online without any fuss. I think it works equally well as a love story or as science fiction, or speculative fiction, indeed Beef reminds me very much of one of my favourite authors, Margaret Atwood, just with more swearing! I recommend this book whole-heartedly to vegan, vegetarian and omnivore alike!

To read a non-spoiler interview with the author go here

And to buy a hard copy go  here