A Guide to the Land Snails of Australia

This fabulous little publication could also be called A Guide to the Land Snails, Slugs and Semi-slugs of Australia. And yes – semi-slugs are new to me too!

Land snails have a shell that enables the whole animal to tuck itself inside and seal the entrance as a protection against moisture loss and predators. Slugs have no shell at all; and I was surprised to learn they still have an internal shell.  Semi-slugs are halfway between the two – with a long slug-like body, and some of the animal is inside a small shell that sits on the back like a little backpack. In Australia there are an estimated 2,500 species of Australian native land snails but only a small proportion of these are semi-slugs and slug species, so the book title is apt after all.

The evolution of semi-slug and slug species is a process known as limacisation. Snail shells allow the animal to protect itself from drying out during dry periods, and Australia even has some super hardy arid zone specialists. But shell production is energetically costly, and requires plenty of calcium in the environment. In areas with a constant supply of moisture such as rainforest the need for protection from drying out is redundant. In moist forests where the volcanic soils lack calcium eg the Wet Tropics of Queensland, limacisation makes even more sense.

What this means is that we have land snails all over Australia, but our slugs and semi-slugs are restricted to pockets of remnant rainforest – and most of the  slugs we see in Victoria are introduced! Below is an exception – a semi-slug known as Helicarion cuvieri photographed in most forest in Healesville by artist and all round slug fan Clare James. 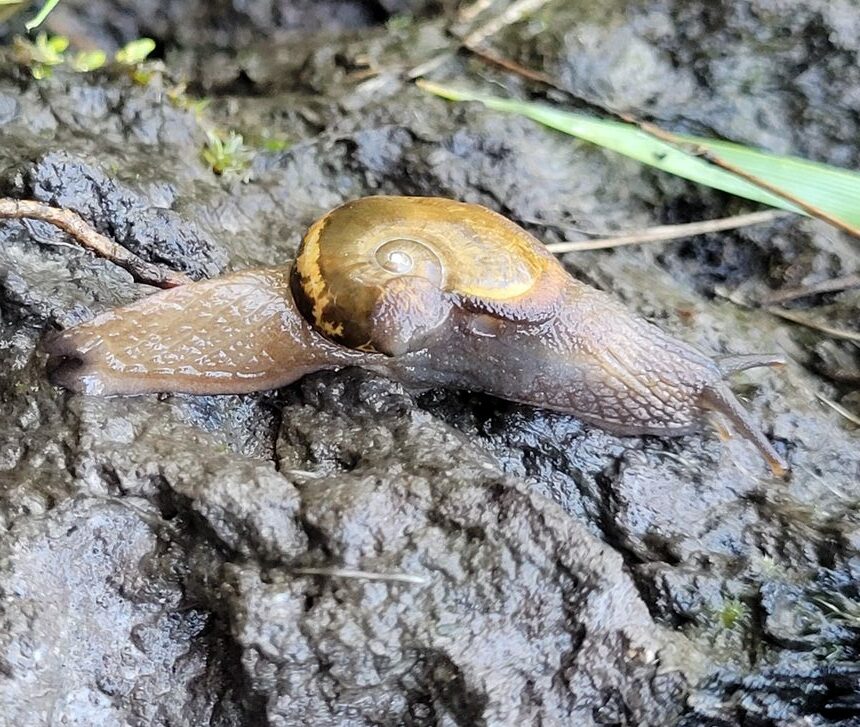 We also have plenty of non-native snails. The book’s chapter on introduced snails and slugs explains that there are nearly 50 species that are found in our backyards, parks and farmland. The European Garden Snail is a very familiar introduced snail. And while all of our local slugs are also from elsewhere the most spectacular are surely the Leopard slugs, described in the book as omnivorous and very adaptable indeed: ‘some species will enter human dwellings and feed on mould growing in shower recesses, eat pet food left in bowls, and even eat damp-affected carpet’! I imagine these creatures are doing very well indeed in this triple-dip La Nina we are experiencing.

Introduced snails and slugs give our local snail fauna an undeserved bad reputation. My gardening friends – whether vegetable or native flora growers – have to carry out concerted slug wars!  In contrast to these introduced slugs and snails, Australian snails and slugs do not feed on leafy vegetable matter, including our vegetable seedlings and flowers. A small number of species are carnivorous, and most native species feed on ‘fungi, lichen and other biofilms growing on rotting vegetation, on timber and rocks and even living plants’. A biofilm is a layer of lichen and microalgae.  Our snails, slugs and semi-slugs are actually part of the incredible fungal ecosystem that are we are only just beginning to appreciate!

Paula Peeters, nature writer, scientist and illustrator wrote a lovely article about the slugs of her local rainforest, and how the bright pink and yellow slugs are so very similar to the colours of fallen leaves…The Kaputar Pink Slug (Triboniophorus nov “kaputar”) blends into to the forest floor with those maroon eucalyptus leaves ones sometimes sees on the ground…

A bit more about the book! A Guide to Land Snails of Australia was written by Dr John Stanisic, known as the ‘The Snail Whisperer’ along with his co-authors his partner Lorelle Stanisic and colleague Darryl Potter.

John and Darryl have been carefully and passionately documenting Australia’s land snail fauna for nearly 30 years, via the Australian Museum and then the Queensland Museum – with a collection of 200,000 specimens. John says “Among these were almost 900 species that were identified as new to science. More than 400 have been described in a labour of love that continues to this day with my wife Lorelle who has recently joined the ranks of the snail scientists”. Go snail team!

The book came about as a general interest version of the landmark tomes Australian Land Snails Vol 1 and 2 ( Stanisic et al 2010, 2018) which illustrated over 1500 species. This book covers a more manageable 160 species, with plenty of photographs for identification. And it has stacks of information on the ecology of this fascinating group of creatures!

For example, did you know that mating in some snails features an organ known as a head wart? This gland is located on top of the head between the upper tentacles and produces pheromones essential to the process. When two snails meet and are preparing to mate there is a ‘a foreplay ritual involving intense touching with the lower tentacles and foot lappets’ and ‘the surface texture of the head wart differs from species to species, and when aroused during foreplay the snails evert the head wart, which is consistently touched before mating can proceed”. WELL! Racy!

I enjoyed reading some of the names of the genera – all new to me and very endearing, including the Panda snails – Pygmipanda, and Discopanda. How evocative! And I wonder who Briansmithia was named after?!

As in other animal groups or taxa such as bats and flower wasps,  variations in the morphology of the genitalia are all that may differentiate between closely related species. I love the precision of biological language which is used throughout the book while still remaining readable eg “The penis is an evertible tubule with complex internal architecture of longitudinal and diamond shaped thickening (pilasters).” It is the variation in the shape of the pilasters that differs between closely related species. Some Christmas lunch trivia for you perhaps?

Speaking of Christmas! Please buy from our wonderful local artists and authors this season 🙂
To purchase A Guide to Land Snails of Australia and a heaps of other wonderful books – see CSIRO Publishing here